A multinational team of researchers has announced a first for the world of paleontology: a dinosaur preserved sitting atop a nest of its own eggs that include fossilized babies inside. The scientific paper describing the discovery was recently published in the journal Science Bulletin. The primary authors are Drs. Shundong Bi, professor at Indiana University of Pennsylvania and research associate at Carnegie Museum of Natural History (CMNH), and Xing Xu, paleontologist at the Institute of Vertebrate Paleontology and Paleoanthropology in Beijing. The research team also includes CMNH co-interim director and lead dinosaur paleontologist Dr. Matt Lamanna. CMNH scientific artist Andrew McAfee produced illustrations for the paper.

“Dinosaurs preserved on their nests are rare, and so are fossil embryos. This is the first time a non-avian dinosaur has been found, sitting on a nest of eggs that preserve embryos, in a single spectacular specimen,” explains Dr. Bi.

The fossil in question is that of an oviraptorosaur, a group of bird-like theropod dinosaurs that thrived during the Cretaceous Period, the third and final time period of the Mesozoic Era (commonly known as the ‘Age of Dinosaurs’) that extended from 145 to 66 million years ago. CMNH’s famous “Chicken from Hell,” Anzu wyliei, is another type of oviraptorosaur. However, whereas Anzu is part of the largely North American oviraptorosaur subgroup Caenagnathidae, the new fossil is a member of another major subgroup, the Oviraptoridae, which has thus far been found only in Asia. The new specimen was recovered from uppermost Cretaceous-aged rocks, some 70 million years old, in Ganzhou City in southern China’s Jiangxi Province.

The fossil consists of an incomplete skeleton of a large, presumably adult oviraptorid crouched in a bird-like brooding posture over a clutch of at least 24 eggs. At least seven of these eggs preserve bones or partial skeletons of unhatched oviraptorid embryos inside. The late stage of development of the embryos and the close proximity of the adult to the eggs strongly suggests that the latter died in the act of incubating its nest, like its modern bird cousins, rather than laying its eggs or simply guarding its nest crocodile-style, as has sometimes been proposed for the few other oviraptorid skeletons that have been found atop nests. 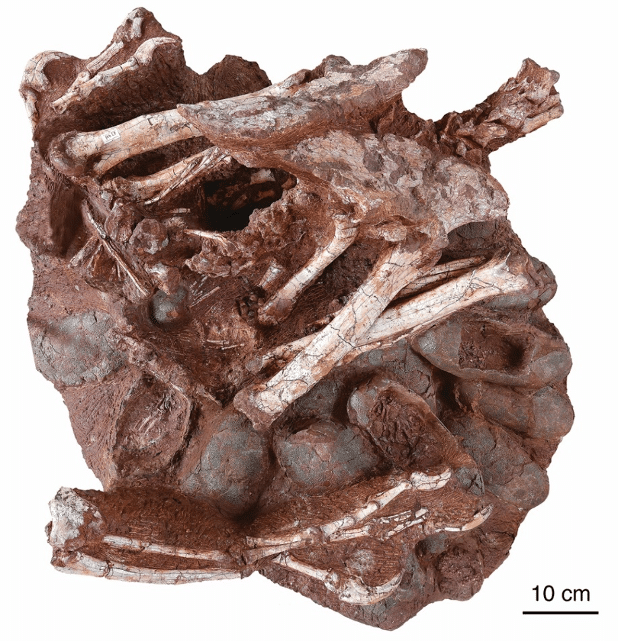 The ~70-million-year-old fossil in question: an adult oviraptorid theropod dinosaur sitting atop a nest of its eggs. Multiple eggs (including at least three that contain embryos) are clearly visible, as are the forearms, pelvis, hind limbs, and partial tail of the adult. Photo by Shundong Bi, Indiana University of Pennsylvania.

“This kind of discovery—in essence, fossilized behavior—is the rarest of the rare in dinosaurs,” explains Dr. Lamanna. “Though a few adult oviraptorids have been found on nests of their eggs before, no embryos have ever been found inside those eggs. In the new specimen, the babies were almost ready to hatch, which tells us beyond a doubt that this oviraptorid had tended its nest for quite a long time. This dinosaur was a caring parent that ultimately gave its life while nurturing its young.”

The team also conducted oxygen isotope analyses that indicate that the eggs were incubated at high, bird-like temperatures, adding further support to the hypothesis that the adult perished in the act of brooding its nest. Moreover, although all embryos were well-developed, some appear to have been more mature than others, which in turn suggests that oviraptorid eggs in the same clutch might have hatched at slightly different times. This characteristic, known as asynchronous hatching, appears to have evolved independently in oviraptorids and some modern birds.

One other interesting aspect of the new oviraptorid specimen is that the adult preserves a cluster of pebbles in its abdominal region. These are almost certainly gastroliths, or “stomach stones,” rocks that would have been deliberately swallowed to aid the dinosaur in digesting its food. This is the first time that undoubted gastroliths have been found in an oviraptorid, and as such, these stones may provide new insights into the diets of these animals.

Says Dr. Xu, “It’s extraordinary to think how much biological information is captured in just this single fossil. We’re going to be learning from this specimen for many years to come.”

Carnegie Museum of Natural History, one of the four Carnegie Museums of Pittsburgh, is among the top natural history museums in the country. It maintains, preserves, and interprets an extraordinary collection of millions of objects and scientific specimens used to broaden understanding of evolution, conservation, and biodiversity. Carnegie Museum of Natural History generates new scientific knowledge, advances science literacy, and inspires visitors of all ages to become passionate about science, nature, and world cultures. More information is available by calling 412-622-3131 or by visiting the website, www.carnegiemnh.org.