According to the Centers for Disease Control and Prevention, an estimated one in sixty-eight children (one in forty-two boys and one in one-hundred eighty-nine girls) has been identified with an autism spectrum disorder (ASD). Even though there are many families facing similar circumstances, many still fill isolated and alone. For those whose families aren't directly impacted, there are many misconceptions and questions surrounding autism.

As the mother of twin sons with autism, Karla Akins, author of A Pair of Miracles: A Story of Autism, Faith, and Determined Parenting (Kregel Publications), hopes to help create a greater awareness and understanding of what autism is and to offer encouragement and reassurance for families living with the effects of autism firsthand.

Below is an excerpt from the chapter "What is Autism?" from A Pair of Miracles by Karla Akins ©2017 by Kregel Publications.

When the doctors first diagnosed my twin boys with autism in 1998, the only thing I knew about it was the character Dustin Hoffman played in the movie Rain Man. It sounds incredible, but I honestly wasn't aware that there was a diagnosis for people with developmental disabilities who acted as my boys did. Society was just beginning to be more aware of a growing group of behavioral characteristics called autism. Looking back on people I knew growing up, I can now understand that they may have had autism, when I thought they were intellectually disabled. I didn't understand that, just because someone couldn't express themselves, it didn't mean they weren't intelligent.

When my boys turned two, I realized that something wasn't "right" with them. They spent most of their time biting themselves and each other, screaming, and hitting me. They didn't play with toys and were just learning to walk. They didn't babble and only cried. It was a constant guessing game trying to figure out what they wanted. They were simply miserable.

All I had at my fingertips for support was a rickety, 1980s-era IBM personal computer. As a pastor's wife, isolation was an issue for me. Because of my husband's church position, I couldn't openly share what we were going through as a family (I'll share more about that later).

That's how I wound up in an AOL autism chat room, filled to the brim with mamas and grandmas who had children with autism. In those days, proper citizens didn't post selfies and Facebook was nonexistent. (Founder Mark Zuckerberg was then only thirteen years old.) Most people protected their privacy, so it was easy to remain anonymous. I spent hours every evening sharing my struggles and reading about others who fought the same battles. It was truly a blessing from the Lord to make these new friends. I don't know how I would have managed otherwise.

What I learned from my desperate search for answers is that autism was, and continues to be, a complex condition not easily understood by researchers. Even though they had gathered and studied data, it was fragmented. There were (and continue to be) as many disagreements on how to interpret the data as there were ideas about how to treat it.

Since the twins were born in 1995, technology has advanced from landlines to cell phones and wireless computing. NASA has landed a rover on Mars. We've seen the invention of the artificial heart, YouTube, and iPads. You'd think there would be more progress regarding how science perceives autism, but there isn't. Experts are still puzzled about the disorder and there are no one-size-fits-all answers.

However, the signs to look for in a young child have remained consistent. According to the United States Centers for Disease Control, a toddler with Autism Spectrum Disorder (ASD) might:

People with autism vary in IQ. They are not all cognitively impaired. In fact, some have quite high IQs. Autism has nothing to do with intelligence. It is a brain-based, neurological condition. It has less to do with psychology and more to do with biology. It is not a mental illness. It is a developmental disability that appears during the first three years of life, is five times more prevalent in boys than in girls, and respects no racial, ethnic, or social boundaries. Family income, lifestyle, or education levels have no effect on its occurrence.

Autism is often referred to as an "invisible disease" because you can't see autism by just looking at a person. But if you watch someone with autism, you may see that they interact, behave, and learn differently than most people. This spectrum is extremely broad and ranges from those with giftedness to the severely challenged. Some adults with autism can live independently, while others need constant supervision and support.

This brain disorder affects a person's ability to communicate, reason, and interact with others. The fact that it's a spectrum disorder (meaning it affects a wide range of conditions) makes it even more difficult to treat and understand because it affects individuals differently and to varying degrees of severity. As with my adopted twins-who were also diagnosed with fetal alcohol disorder, apraxia (an inability to manage coordinated movements, including their speech), and intellectual disability-autism is often found in combination with other disabilities. 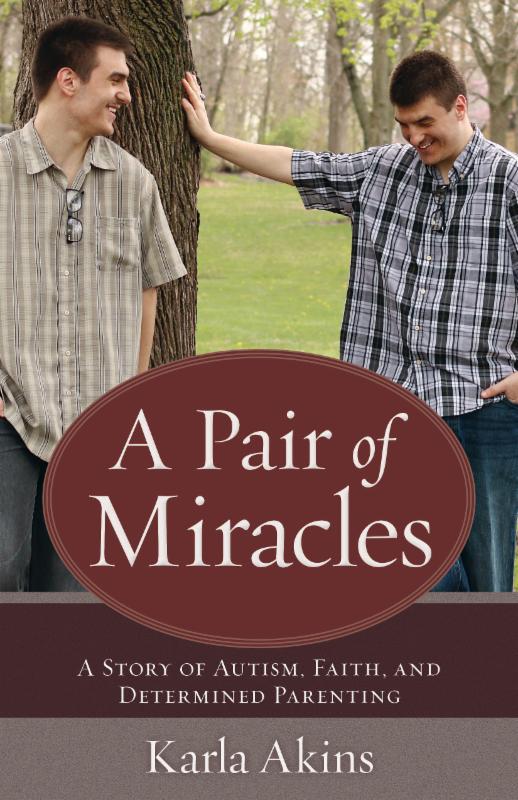 Karla Akins is the mother of five, including twin sons with autism. She has a bachelor's in special education from Western Governors University and a doctorate in Christian education from Kingsway Theological Seminary. She has nearly four decades of teaching experience in homeschooling, private school and public education.

Akins has also served in ministry for more than 30 years and is co-minister at Christian Fellowship Church in North Manchester, Indiana, with her husband, Eddie. She is also a popular speaker at conferences and retreats. In addition to A Pair of Miracles: A Story of Autism, Faith, and Determined Parenting, Akins is the author of four other books.

Akins loves hearing from her readers. Her online home is www.KarlaAkins.com, and she is also on Facebook(KarlaKAkins) and Twitter (@KarlaAkins

Reasons why getting help for your fears and anxieties is important