On Friday August 5, Researchers at  Powdermill Nature Reserve, the environmental research center of Carnegie Museum of Natural History, recorded the 800,000th bird captured and banded during its 60-year-old bird banding program. The much-anticipated bird turned out to be a Cedar Waxwing, a common but beautiful species regularly banded at Powdermill. Number 800,000 was a bird of unknown sex that hatched this year. Although it still has some juvenal feathers, it has already started its fall molt and shows Cedar Waxwings’ signature sleek black face mask. Interestingly, this bird’s tail band is orange rather than the typical yellow. This is because the bird was fed honeysuckle berries, which have a red carotenoid pigment called rhodoxanthin, while still in the nest and growing its first set of feathers. That pigment was incorporated into the bird’s new tail feathers, a phenomenon described by Powdermill researchers in a paper published in 1992. 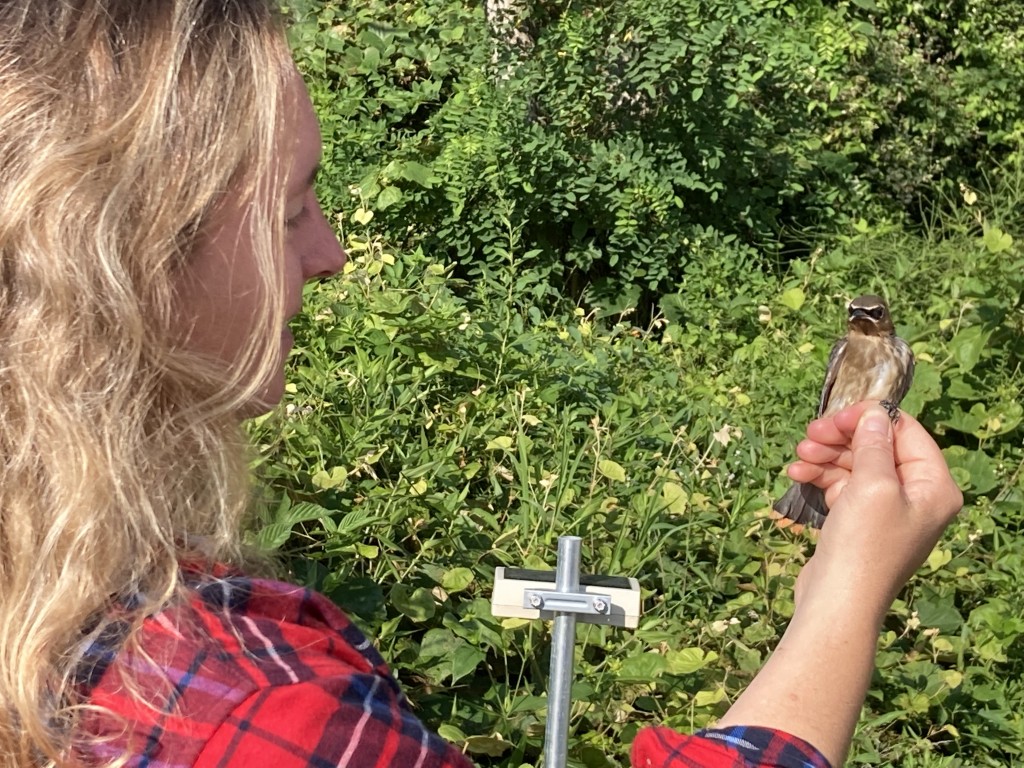 “At the end of the banding day yesterday, we had 45 birds left to reach our milestone, and knew that it would be captured this morning. We had been anticipating this bird all year, and it’s fitting that number 800,000 would happen during the 60th anniversary of the Powdermill bird banding program,” said bird banding program manager Annie Lindsay. “Cedar Waxwings are common at Powdermill and we band hundreds of them each year. It was a favorite of our founder, Bob Leberman, and serves as a wonderful reminder of him and the work he did to lay the strong foundation for the research we do at Powdermill Avian Research Center today.”

Based in Rector, PA in the Laurel Highlands Region, Powdermill Avian Research Center (PARC) operates the nation’s longest-running, year-round, professional bird banding program. The banding staff bands about 10,000 birds per year and collects data on another 5,000 recaptures. PARC is enjoying a banner year in 2021—in addition to the milestone bird band, the program celebrates its 60th anniversary and anticipates groundbreaking on a state-of-the-art avian research facility later this fall. Powdermill made international headlines in September of 2020 for banding a rare part-female, part-male Rose-breasted Grosbeak gynandromorph.

“For the past 60 years, we’ve been building our dataset one bird at a time” said Luke DeGroote, avian research coordinator. “Our data have been used by us and researchers around the world to understand birds’ natural history and how they’re responding to our rapidly changing world. Although climate change was likely not on the mind of Bob Leberman when he banded that first bird June 18th of 1961, our data have been used to show that birds are migrating a week earlier and breeding nearly a month earlier than before. It is an honor to continue collecting data using the same safe, careful, and precise methods of Mr. Leberman to ensure that our data can continue be used to answer questions not yet formulated.”

An emerging national leader in avian research, PARC evaluates and disseminates best practices for novel technologies to track birds, contributes to management recommendations for at-risk species and populations, tests the effectiveness of bird-safe glass and window avoidance strategies, and studies the effects of habitat and species loss on migrating birds.

Carnegie Science Center announces opening and final tour of GUITAR: The Instrument That Rocked the World