If there is more than one child in your family, chances are you also have sibling rivalry and squabbles. Kids taunt, tease and fight over the smallest things—who gets the biggest cookie or who sits in the front seat. These arguments may seem silly, but they can quickly escalate.

Kids frequently use hurtful name-calling like “stupid” and “moron.” In addition, researchers have found that 70 to 80 percent of families report some amount of physical violence when siblings fight.

For parents, it can be frustrating to watch and listen to kids fight. Constant fighting raises stress levels for everyone at home. While you don’t need to get involved with every squabble, it is important to teach kids how to communicate respectfully, without nasty words or fists.

In order to help siblings get along, it’s important to understand why they fight in the first place. It is natural for brothers and sisters to be jealous and competitive with each other, which often leads to squabbling. Other reasons include:

• Individual temperament. Each child’s temperament plays a big role in how they get along with each other. Those with different styles tend to clash more. For example, a high-energy child’s constant activity may annoy a sibling who is more laid back.
• Boredom. When bored, many kids start bothering siblings, looking for a reaction. For many, it becomes a game to fill a slow summer day!
• It is accepted. If kids know that this behavior is allowed or overlooked, there’s no incentive for them to stop.
• Resentment. When a child thinks that a sibling is getting more attention than they are, they may resent their sibling. This often happens when one child is sick or has learning or emotional issues that need more time and attention from parents.
• Negative role models. Kids learn behavior from parents and other adult role models. When parents shout, slam doors and become verbally abusive during disagreements, kids are likely to model these bad habits in their own conflicts.

Helping kids get along 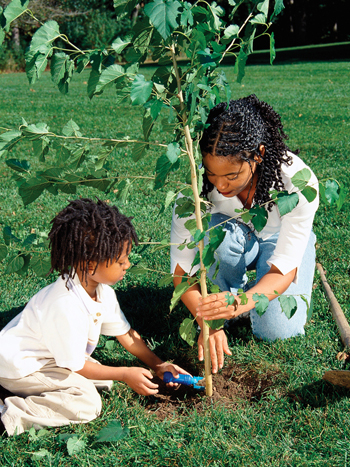 Avoiding the fights is the easiest way to deal with sibling squabbles. Try these tactics to ease the conflict in your home.

Set ground rules. Tell the kids in advance what is acceptable behavior in your family. Get them involved in making rules and consequences to help them learn responsibility for their actions.
Teach communication skills. Teach kids how to argue constructively. Show them how to take turns sharing their concerns, how to listen and how to work on resolving problems together. They should also learn that name-calling and hitting are not acceptable during an argument.
Help them find personal space. Too much contact with siblings can lead to fighting. Avoid this by making sure kids have some time without siblings.
Have fun as a family. Showing the kids that your family can have fun together helps build positive relationships. Watch a movie, play ball outside or hold a family game night where everyone gets involved and attention.
Schedule favorite toys. If fights frequently break out over favorite toys, television or computer time, schedule these hot items. Post the schedule and each child’s assigned time. If they keep fighting, take the toy away from everyone. They’ll quickly learn to respect the schedule!
Remind kids that fair is not always equal. Many fights start because one kid feels they’ve been cheated. A clingy child may need more attention from a parent, but as long as everyone’s needs are being met, that is what is important.
Spend one-on-one time. Take a few minutes each day to spend one-on-one with each child. If each child feels special, sibling rivalry decreases.

What to do when the fighting starts

Despite a parent’s best efforts, sibling squabbles are unavoidable. If the kids are following the family ground rules, let them work it out on their own. If they have crossed the line physically or verbally, however, parents need to get involved.

Step in and be consistent. Kids quickly learn if they can get away with bad behavior. When their squabbles cross the line, step in and put a stop to it. Separate the kids until everyone is calm. Being consistent when handing out consequences is also important. If you say that there’s a negative consequence for hitting, then follow through and enforce it! A rule that is not enforced will not be followed.
Don’t play the blame game. If you ask the squabblers “Who started it?” you’ll probably get a lot of finger pointing and blame. Remind the kids that it takes two to fight. Anyone involved is partially to blame and shares in the consequences. If kids learn that you aren’t going to get involved in mediating their daily squabbles, they will quickly learn to resolve the problem themselves.
Find a “win-win”. If kids are fighting over the same toy or computer time, help them find a way to resolve the situation so that they both win. Maybe they could play a different game together instead or alternate timed turns on a favorite toy.

Sibling squabbles may create headaches for parents, but they are also an opportunity to teach kids important life skills. Learning how to successfully deal with disputes will teach them how to compromise, negotiate and listen to other people’s points of view.

Carla Mooney is a freelance writer from  Gibsonia, PA.

This article appears in the Negotiating sibling squabbles issue of Pittsburgh Parent.

Reasons why getting help for your fears and anxieties is important