How to Make a Thanksgiving Apple Turkey

Growing up one of my favorite traditions during the Thanksgiving season was making apple turkey’s with my Mom. She was my Girl Scout’s leader so sometimes we made them as a Girl Scout’s activity and other times we sat as a family and enjoyed creating them together.

Now that I have my own children, making this Apple Turkey Craft is something I still enjoy doing. Whether you make them on Thanksgiving as a fun family activity or have your children make them beforehand to display for a Thanksgiving decoration, your kids will love this new fun tradition! (I originally posted this craft on One Artsy Mama in 2011 as a guest post.)

HOW TO MAKE A THANKSGIVING APPLE TURKEY CRAFT 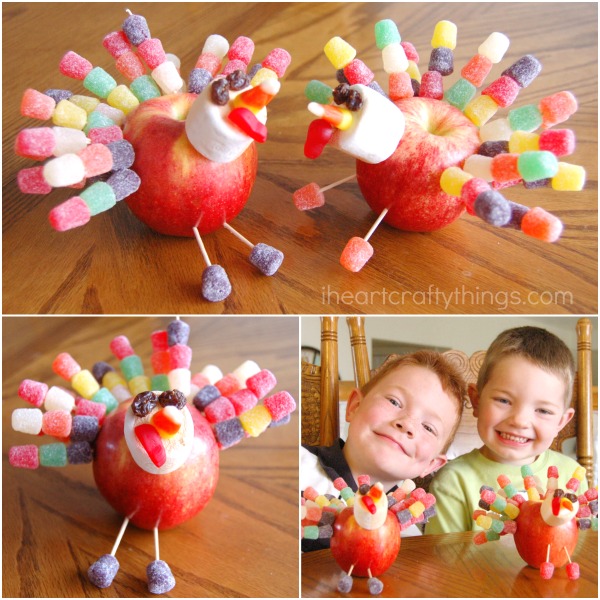 1. Poke 3 spice drops onto several toothpicks to make the turkey feathers. Insert the ends of the toothpicks along the back of the apple. If your apple starts to teeter one way you have to counter balance it with more feathers on the other side.

2. Poke a large marshmallow into another toothpick and poke it into the front of your apple. Fill in your apple turkey’s face by poking in raisins for eyes, a candy corn beak and half of a red fruit snack for the waddle. I used a whole fruit snack for my waddle and then we decided it was too big so we cut the others in half. You decide what you like best.

3. Poke one spice drop onto the ends of two toothpicks and then insert them into the front of the turkey for the turkey legs and feet.

Aren’t they seriously the cutest thing ever?! I’m telling you, if you are looking for some gobbly good fun and giggles with your kids, this Thanksgiving apple turkey craft is absolutely perfect!

How to help spot the signs of suicide