Birds, up close and personal

“I’m looking for kids on the taller side,” announces Anna. Specifically, our khaki-clad “tour guide” is looking for a few youngsters to hold up skinny sticks with meatballs on top so that flying birds, presumably carnivores, can swoop down and gobble them up in midflight. 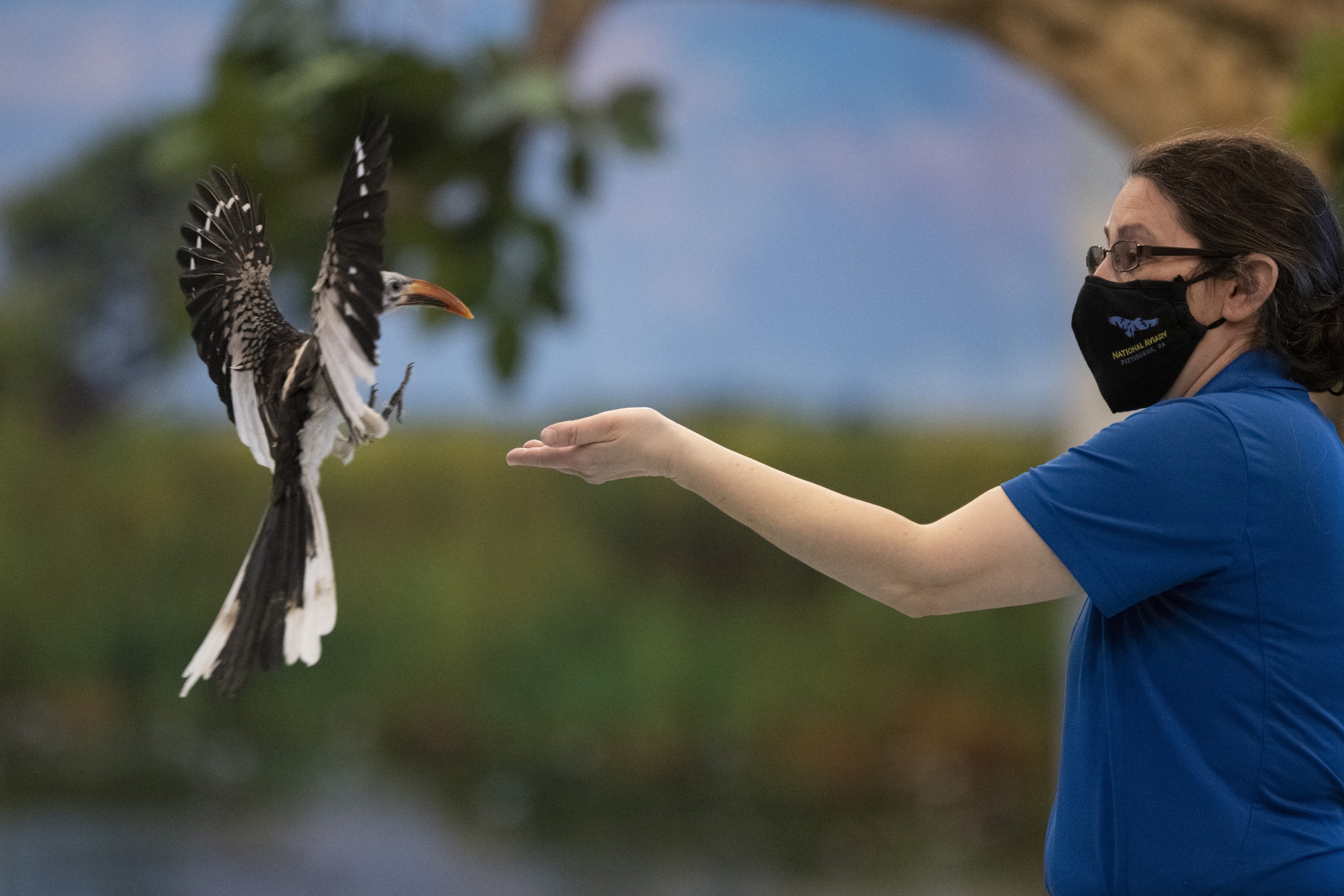 I quietly determine that I am not tall enough for such an intimidating task, but the three preschool-aged children who raise their hands and get selected are obviously braver than me.

A journey to Africa

Welcome to the National Aviary’s brand new African Adventure show, where exotic birds flap their wings, screech, hop, and waddle to the delight of an audience of moms, dads, kids, grandparents, babies, and captivated visitors like me. Drums and music play in the background while Anna and the lilting voice of an African narrator introduce us to Africa and the remarkable birds that live there. 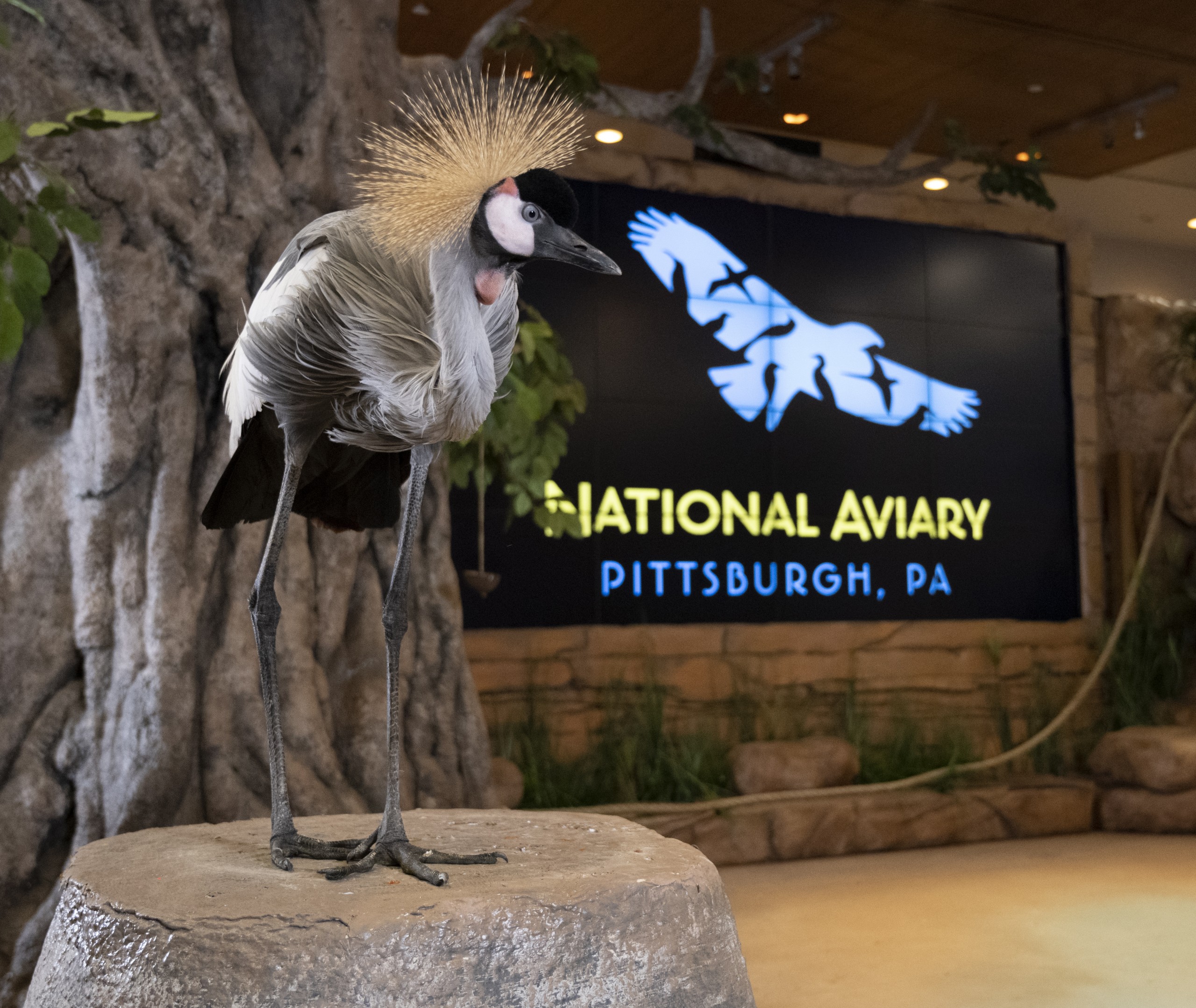 As photos of grey crowned cranes appear on the big multimedia screen in the front of the theatre, the audience “oooohs” in surprise when a real grey crowned crane named Clover flies out and lands on the rock next to Anna, who immediately offers a tasty snack to this spindly-legged bird with a crown of yellow feathers on her head. 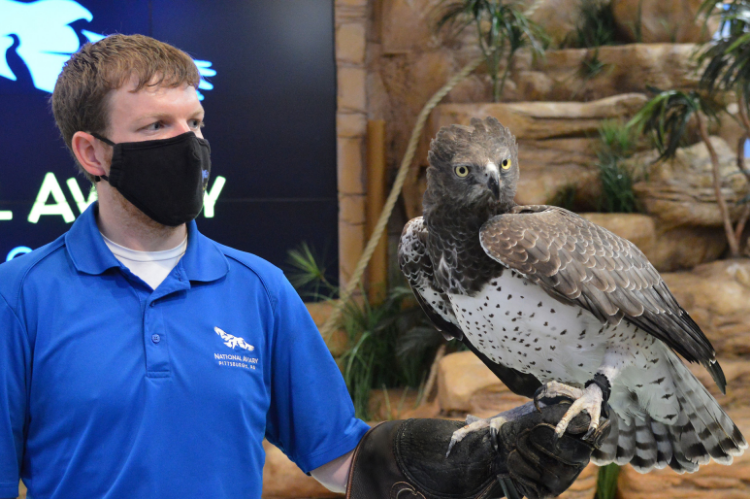 We meet kites, vultures, a penguin, and a red-billed hornbill, just like Zazu from The Lion King. An owl flies from the top of the rocks and lands on a perch in the back of the theatre. When he turns his head, I get a strange feeling that the bird is staring at me until Anna says, “if we had the same size eyes as owls, they would be the size of softballs.”  I decide that this bird’s big eyes must be taking in a lot more than little ol’ me sitting there. 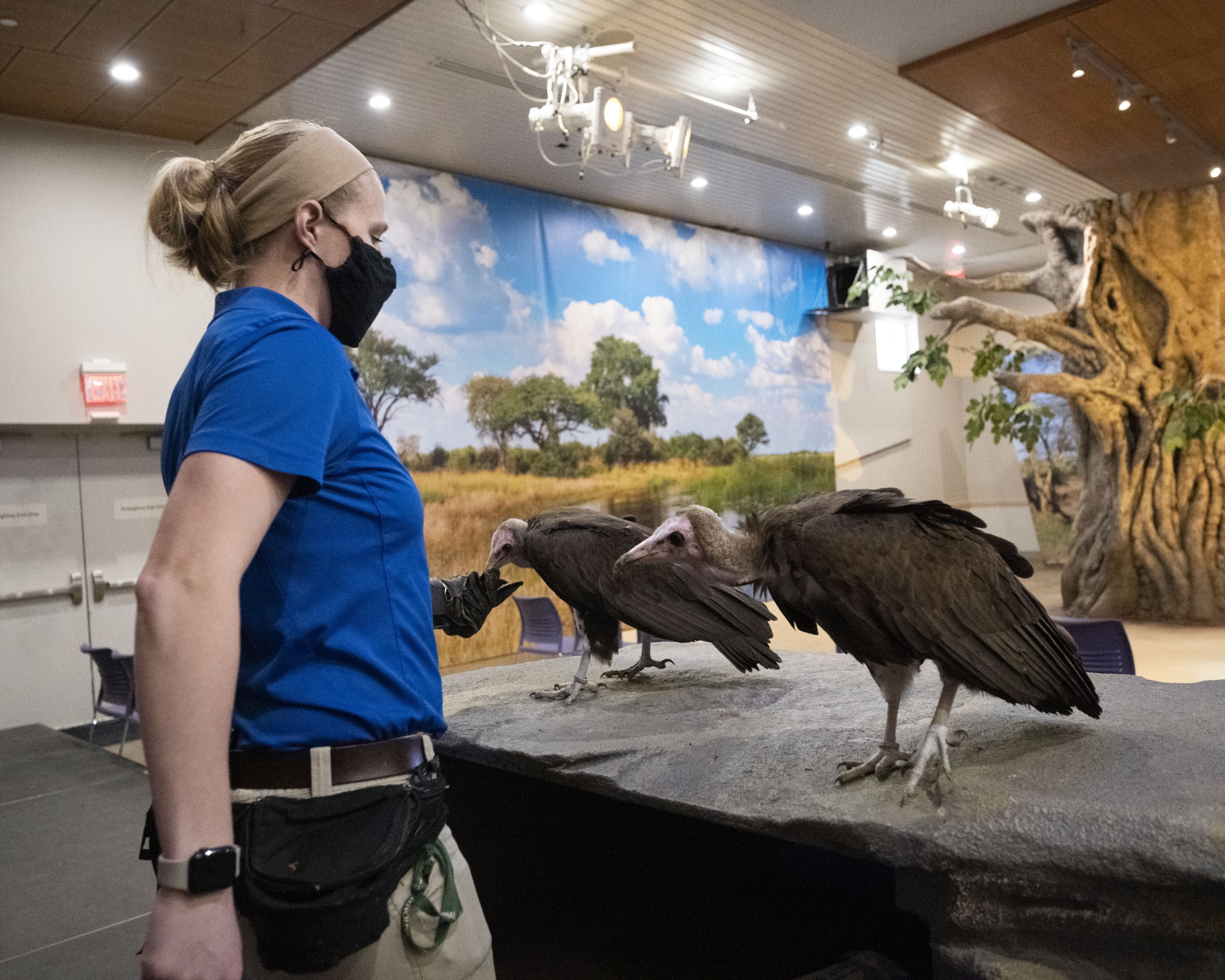 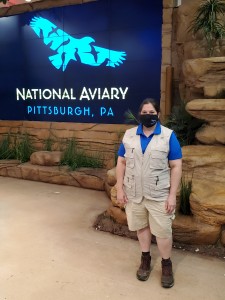 Cathy Schlott, Director of Animal Programs and Experiences at the National Aviary

“I believe any animal could be trained,” says Cathy Schlott, Director of Animal Programs and Experiences at the National Aviary. “We use positive reinforcement and give them lots of treats when we ask them to do something.”

When Cathy and her team create immersive programs like African Adventure, they focus on the animal’s natural behavior and consider how to demonstrate that behavior to give the audience a close up encounter with the animal.

It makes sense to me, especially when, at the end of the African Adventure and Vultures in Flight shows, clever parrots named Woody and Charlie demonstrate how they have been trained to take paper money and stuff it in a clear plastic donation box. It looks like so much fun that kids line up with bills in hand to take their turn.

“Hold it up nice and high for him,” Charlie’s trainer says.

The birds are all business, politely using their beaks to take the bucks, which they methodically drop them into the box. 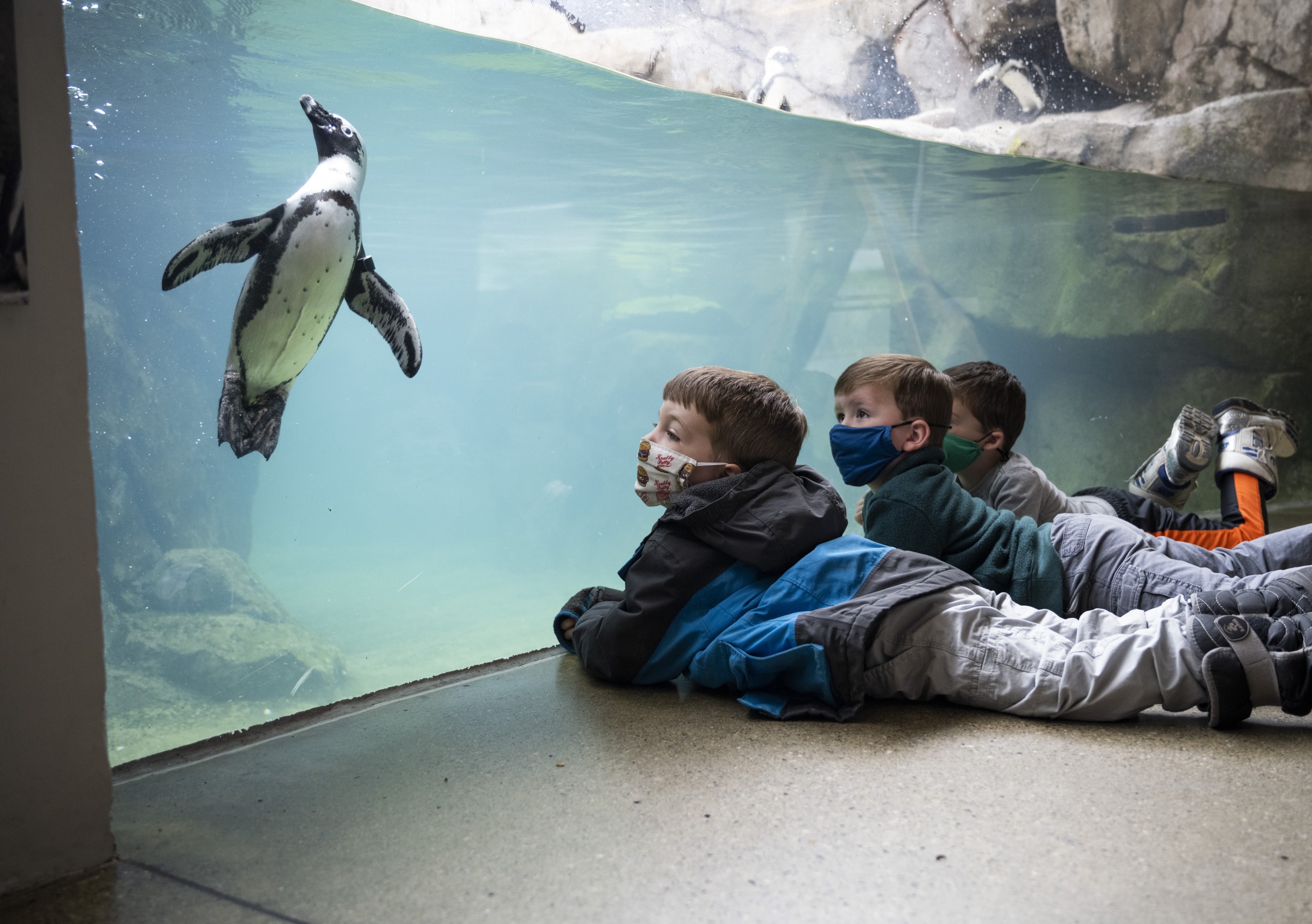 Teaching the importance of conservation

The birds are definitely the rock stars at the National Aviary. Kids and adults love the entertaining music, sets, and multimedia images. However, the shows and displays also reinforce the importance of conservation to protect birds and wildlife that face endangerment or extinction. 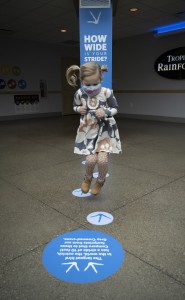 The National Aviary, designated by Congress in 1993, has always been a leader in breeding, avian care, medicine, and conservation. Home to more than 500 birds representing more than 150 species around the world, the National Aviary is the only independent indoor nonprofit zoo dedicated to birds. The staff of conservationists and researchers works to save birds and protect habitats in North America and around the world.

Anna explains how the unsustainable cultivation of palm oil, which is used in food, cosmetics, and many everyday items, leads to deforestation, which wreaks havoc on animal populations that live in rainforests.

Plastic pollution also poses a significant environmental problem.  “By 2050, there will be more plastic than fish in the ocean,” she says.

I’m walking through the Tropical Rainforest habitat with Communication and Content Specialist, Molly Toth, who points out to me various birds like Gus, a great argus pheasant.

I see an ibis, a cockatoo named Bubba, a tree-hanging sloth named Wookie, and a bird that she describes as “the closest thing to the Dodo.” 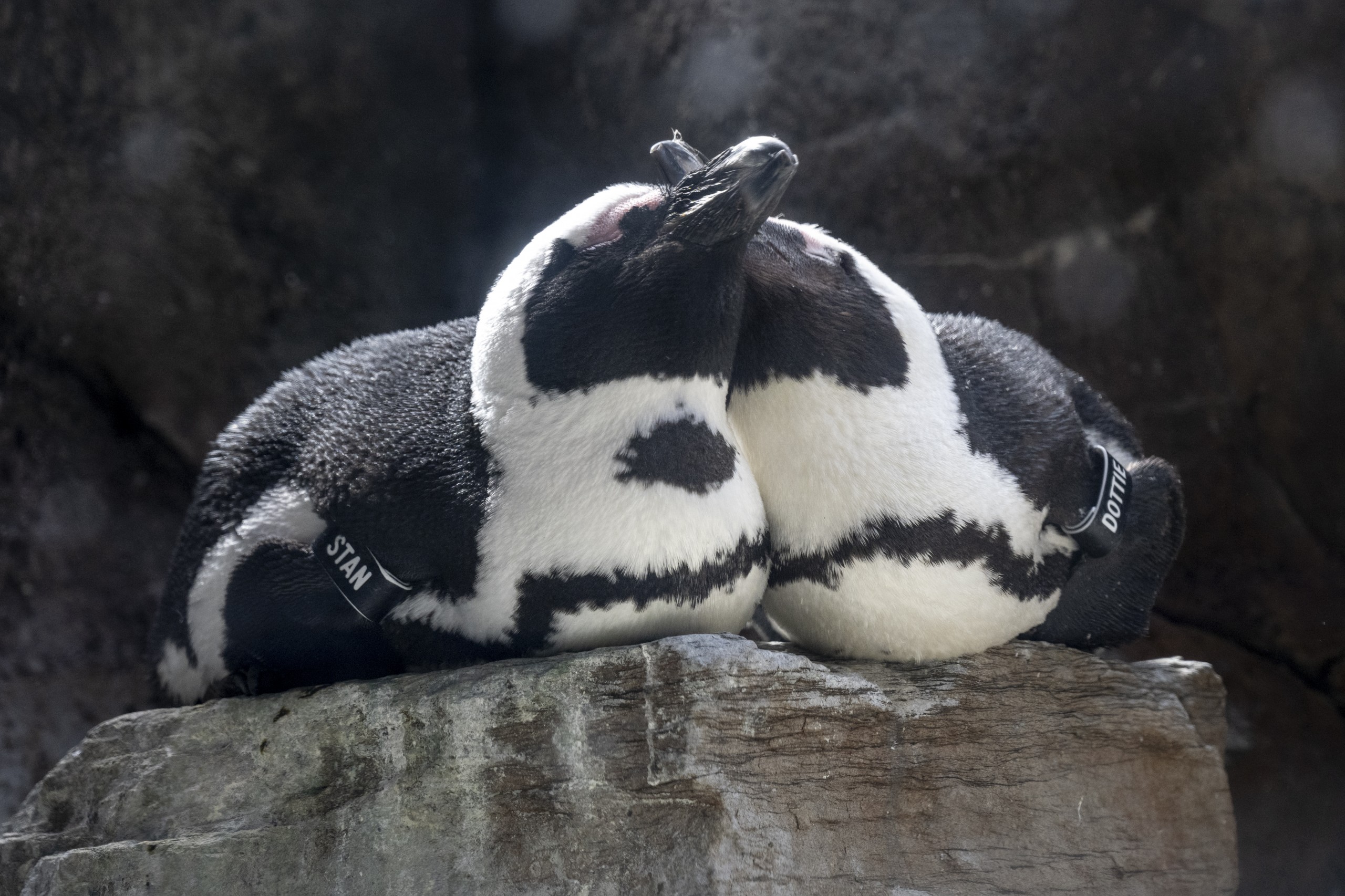 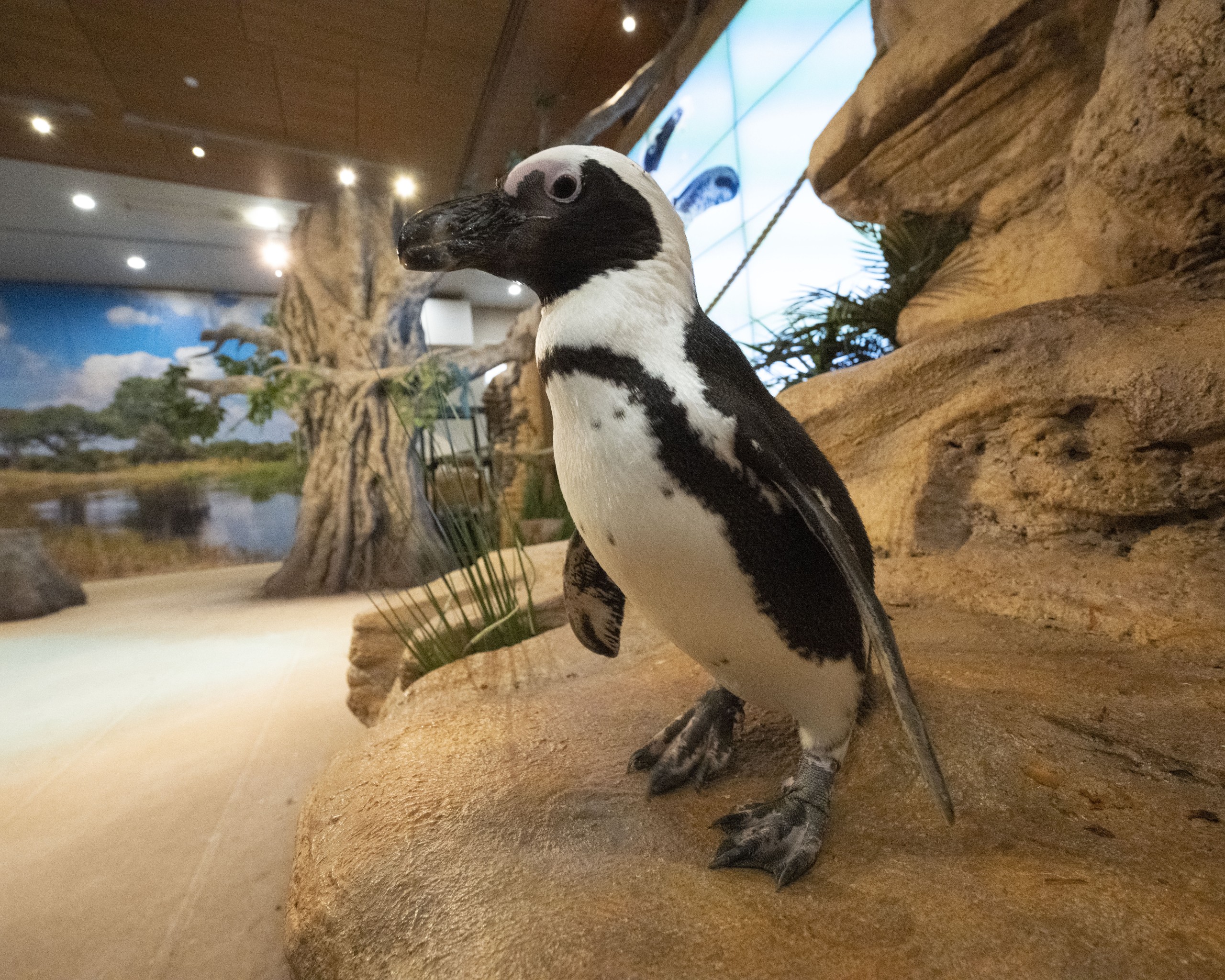 As she starts telling me about their new endangered African penguin, Marge, who hatched in January 2021, I am distracted by an adorable red-haired toddler boy, who is standing on the bridge. He is so excited that he stands on his tiptoes, peers over the rail, and repeatedly shouts, “HI BIRDIES!”

The National Aviary is a trove of information, science, conservation, and fun, and even this little boy knows that Pittsburgh is lucky to have such a treasure.

Writer Ann K. Howley is fondly remembering her old cockatiel, Stickhead, who didn’t know how to stuff dollar bills into a box, but was still a wonderful pet.

Tips to foster 'Happy' not 'Havoc' this holiday season